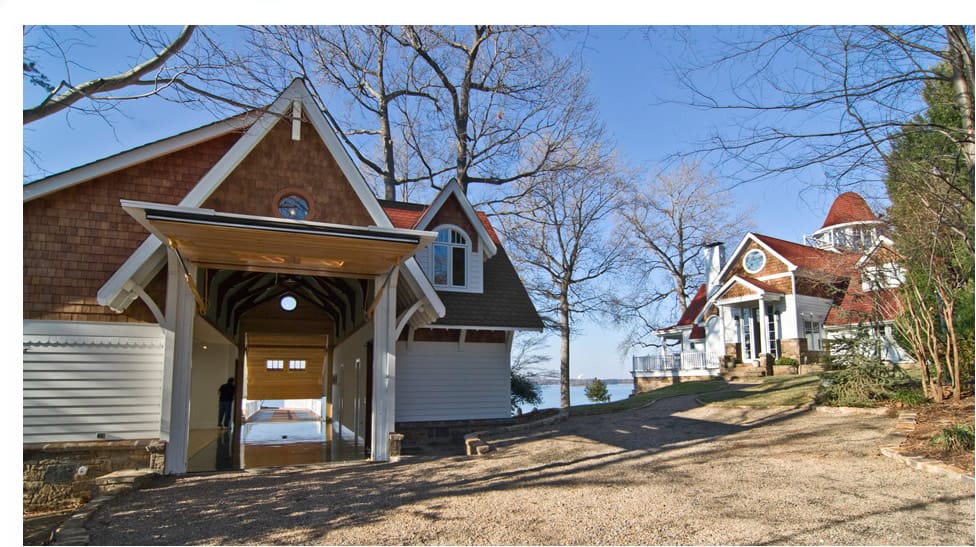 The Carriage House on the lakeshore property of Sid Morris, Cornelius, NC is very likely the most unique in America! It doesn't house horses and horse buggies. It doesn't house antique autos. Instead it houses his R44 helicopter. And that chopper gets to the Carriage House by first landing on a helio pad on the end of his 200' dock. A small electrically driven dolly then gently lifts the chopper with operator then guiding the chopper to its proper stall inside this remarkable 4-star carriage house. 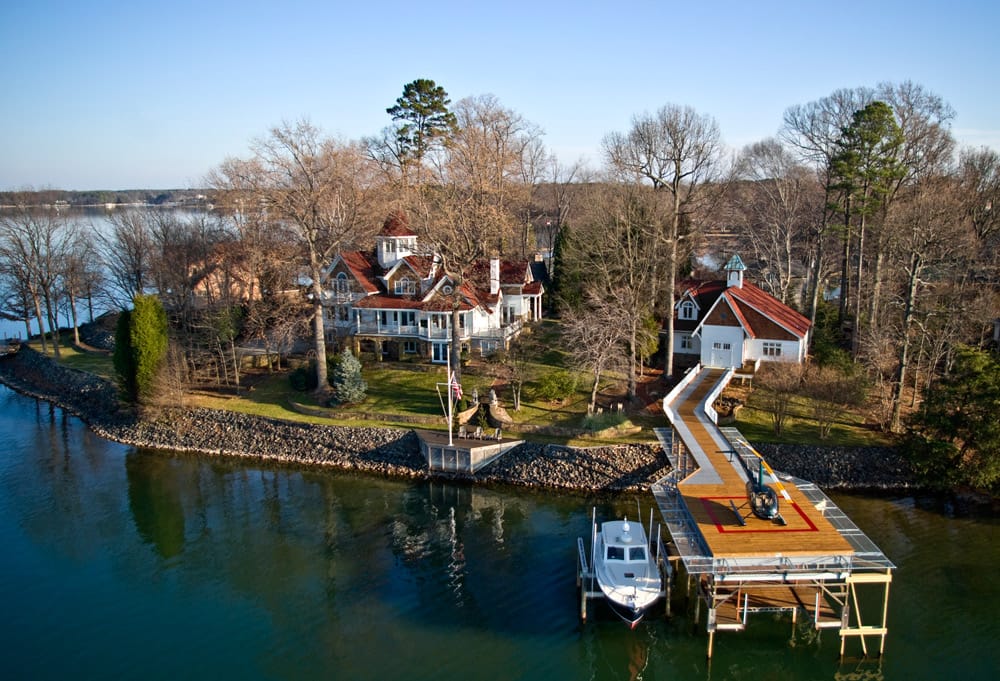 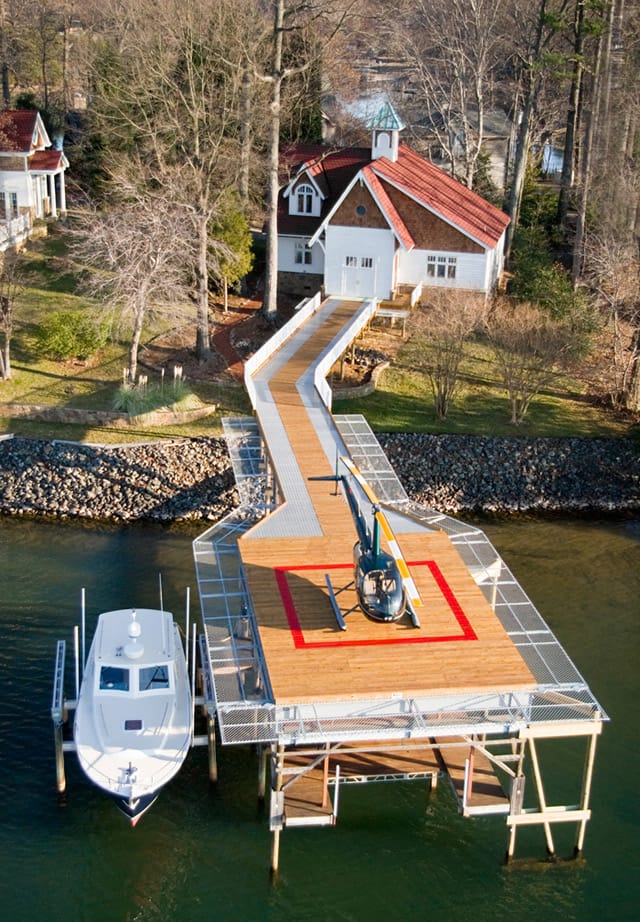 One of a Kind Boat Dock / Helio Pad

Creative genius and caretaker of this incredible property is Sid Morris, CEO, Morris International, a 4AAAA advertising/marketing organization headquartered in Davidson, NC which does sports marketing for NASCAAR, NHRA and other high-profile accounts. He's also into commercial development of offices, restaurants, marinas, etc., at his home port of Cornelius hugging the shoreline of beautiful Lake Norman, about 80 miles north of Charlotte via Interstate 40.

"I've been into building design and architecture all my life. My father was a builder and I guess the genetics just kept on working," Morris modestly acknowledged. He's actually a design graduate, East Carolina University.

So how did this remarkable Carriage House happen? More modesty perhaps but Morris simply said, "This was just a piece of dirt and for a few years I'd been thinking about how to make this more useful. I've got a place in the Virginia mountains where I built a runway for my airplane. Then I got a helicopter, built a helio pad and hangar up there."

But it was still a two-hour drive from his mountain retreat to his home on Lake Norman. "So wouldn't it be great if I could fly home. I started tinkering with the idea of putting a landing pad on top of the boat house. But I didn't want to leave my helicopter sitting outside. After about three years of doodling various ideas, we decided on the concept of an elevated dock running directly to the carriage house. Or perhaps more accurately my helicopter hangar."

Hangar indeed! As these photos so superbly illustrate this would most certainly qualify as the most unique helicopter airport in the world! Morris got his student pilots license when he was sixteen16 and has 40-years of fixed-wing experience. About five years ago he got his helicopter license and now flies his own R44, a beautiful four-passenger bird with 'cruising speed' of about 110 mph. "It's now 45 minutes to my Virginia mountain top place," said Morris.

His carriage house encompasses about 2500 square feet and includes a rather spectacular 24' long x 12' wide 'bonus room' over the shop. The center section which houses the helicopter is 10' wide; another 14' section complete with model train displays sits to one side; on the other side a 12' wide x 24' long 'miniature model shop' suggests another of his hobbies.

Parking space for his helicopter is provided by a 43' long and 16' high center concourse area. Two Schweiss hydraulic doors, each 10' wide by 12' vertical provide access to this remarkable structure.

Both the Schweiss doors are designed with French doors on the exterior. "So when these doors are closed, they match perfectly with the rest of the exterior design. You don't have any impression of looking at a garage door." 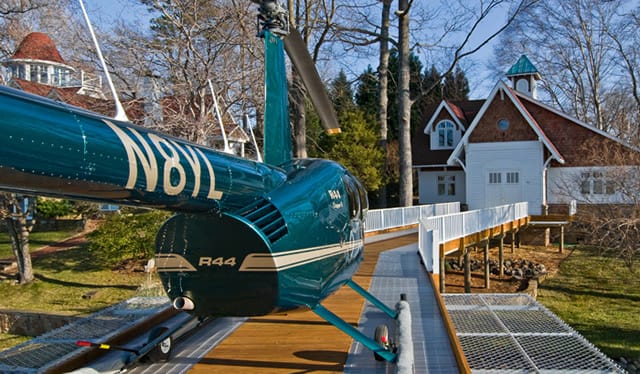 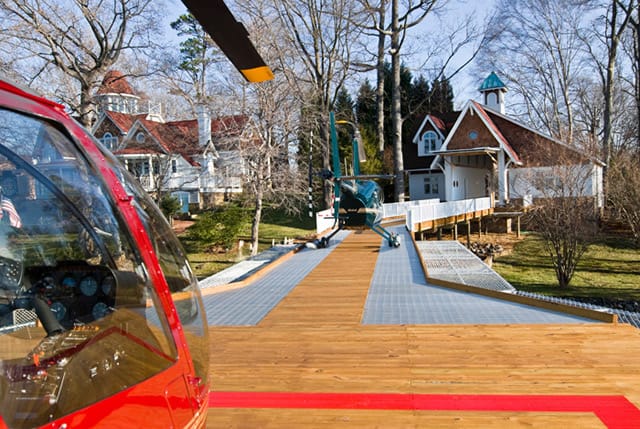 Morris already knew about Schweiss doors. His mountain hangar is fitted with a 40' x 18' Schweiss bifold. "Delivering that door up a 4,000 ft. mountain was quite a task but the Schweiss guys got it there. It was through the woods, up the hills, over the bridges, etc., but they got the job done.

"So it didn't take much thinking to go Schweiss for my carriage house too. I needed a 12' vertical clearspan and didn't want to build higher to hook up bifolds. So these two hydraulics are perfect. No loss of headroom. Very well built. Just lots of structural integrity.

"I see the Schweiss guys each year at Oshkosh for the big experimental air show. Plus I see their doors at hangars wherever I go. They make a very good product and we've been very happy with their service. The doors were delivered on time as scheduled.

"It's the only door I would consider," concluded Morris. Coming from a business man with a history of building name recognition across America for the best of NASCAR certainly also speaks well for the Schweiss name.

Contractor for this impressive facility was an old friend Dominick Ristino, Metropolitan Builders, Charlotte, NC. Morris bought a puppy, a Springer Spaniel named Roscoe, from Ristino 16 years back. That's when Ristino told Morris he was a home remodeler. "At the time we were remodeling our house which used to be a 900 sq. ft. A-frame structure. We got Dominick to take on our house project, and from there eventually came this carriage house. So he's a great friend and a great builder," noted Morris. 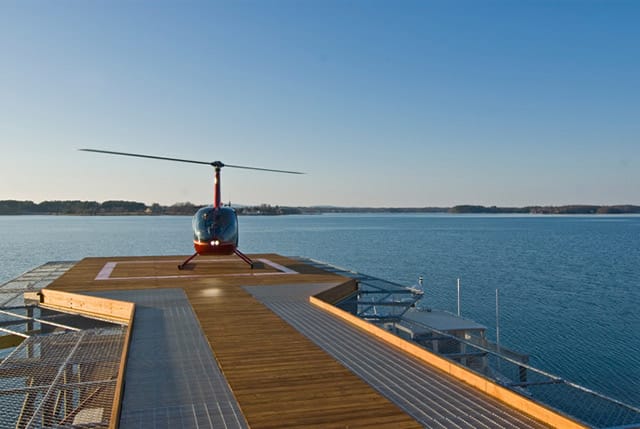 Getting Ready for Take off! 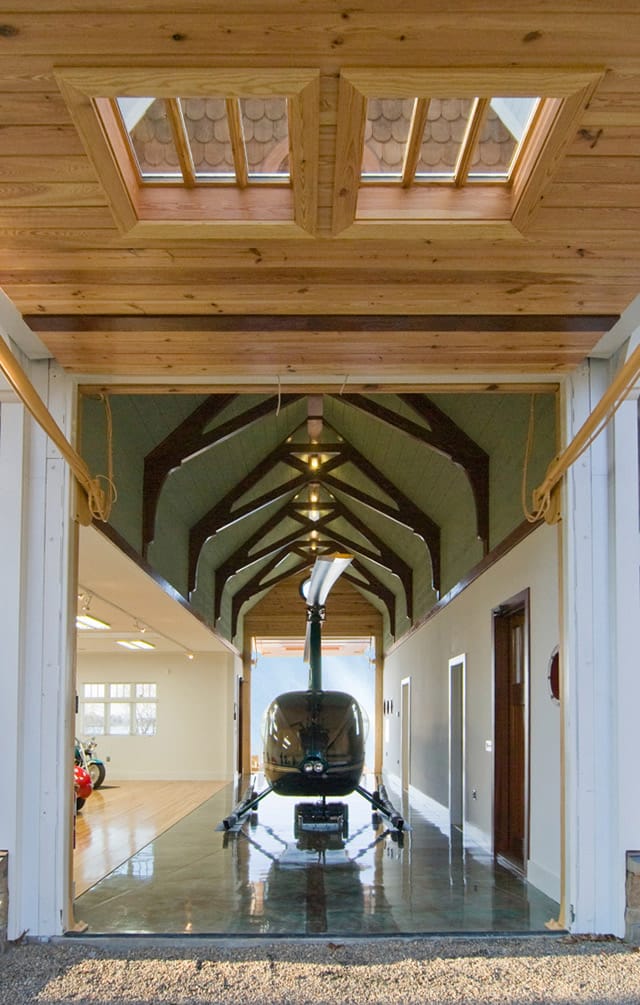 Fancy Wood Lining and Window Trim on The Hydraulic Door 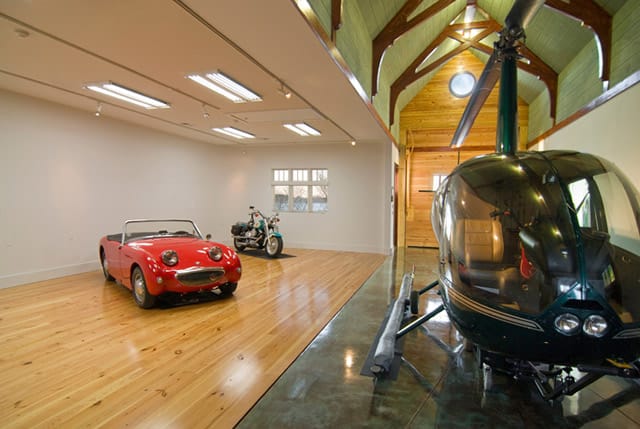 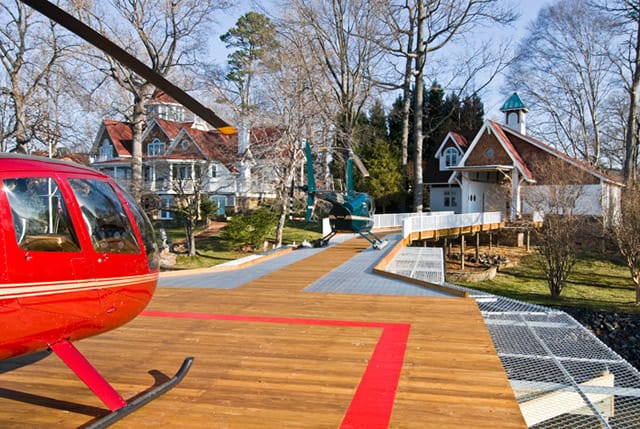 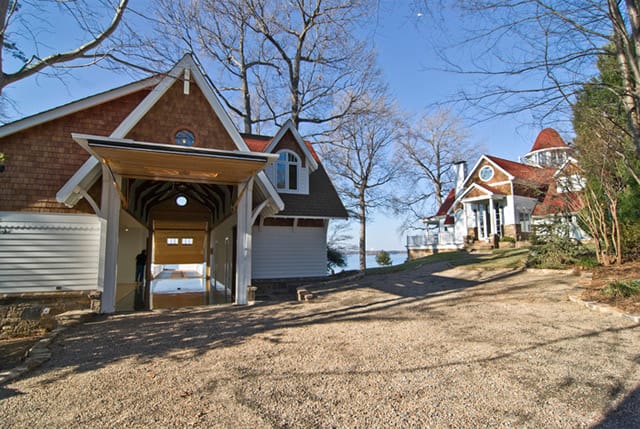 And how did that 2-story dock come into being? Basically because it had too. The original dock included an A-frame house boat. Ristino, Morris and crew removed the A-frame; engineered some I beams structures fastened to the boat house footings and from there constructed the new dock and helio pad 12' higher and directly above the existing dock.

At 27 years of age, film maker/artist/author Travis Wood appears to be adding architectural design to his intriguing resume. Evidence of this new dimension is a most unique structure, a combination studio/guest house that he and his father are constructing on their vacation property on Martha's Vineyard, hugging the south shore of Massachusetts.
Read More And See A Lot More