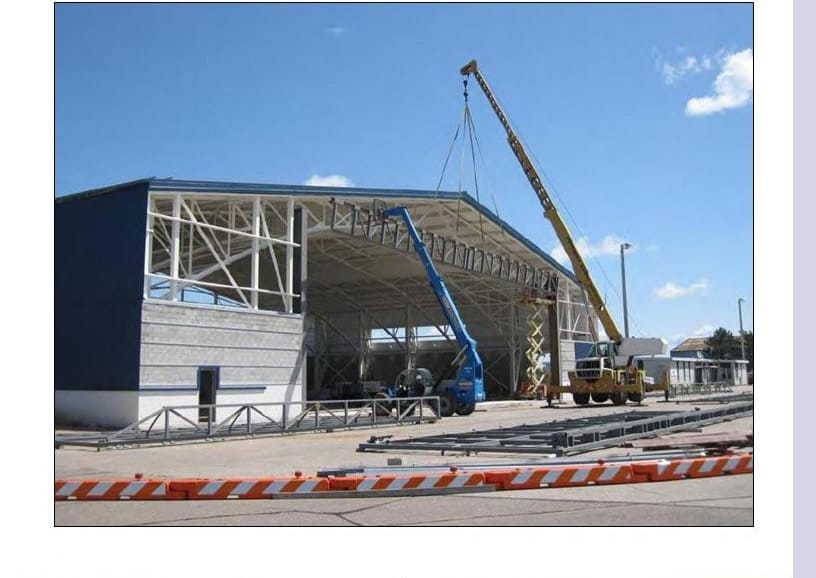 In September of 2009, we started the rehabilitation of Hanger 155 at Chippewa County International Airport in Kincheloe, MI. Our first step was to remove 60 years worth of lead paint from the existing steel substructure and miles of asbestos-containing material. When the building was safe to work in, our demolition subcontractor started on the roof system. The goal was to remove

the existing roof and install a new purlin and heavy-gauge metal deck system, followed by installation of a Firestone UC-6 standing seam roof, all in time to meet the owner's November 15th deadline. The 90' long roof panels were rolled on site and were installed over 2" of insulation. before winter shut the project down, we coated the shot-blasted steel subsystem with two coats of Sherwin William's Micro-Poxy paint and completed all remaining structure demo, other than the main hanger

doors. We completed over 1/2 of the project in two and a half months! Starting up again in mid-April, we finished the demolition, installed new structural steel to support a Firestone VR-Classic Omega siding panel and CPI Day Lightings insulated translucent windows. A new masonry front entrance and concrete support pillars were installed as well as extensive slab on grade entrance work. We utilized Neo Guard's Neo Flex waterproof coating on the exterior block and Ashford Formula on the

existing interior slab. All new electrical and trench drains systems were installed, as well as new man-doors and a service entrance rolling grille. The focal point of the project is the Schweiss bifold door. It is 108' long and 27' tall. The door is held in place by two W30 x 191 steel columns and a massive girder that have a combined weight of over 28,000 lbs. The door was designed to allow for the tail height of a G4 jet. B&B worked with Kal Construction and Schweiss to install the door.

The 90' roof panels were rolled on site, and then brought to the roof using a series of manlifts

Demolition resumed in the spring of 2010

This photo was taken during the installation of the 108 foot long header for the Schweiss Bifold Door.
To get it under the eave, we had to bow the rigging and there was only 3/8" clearence on either side!