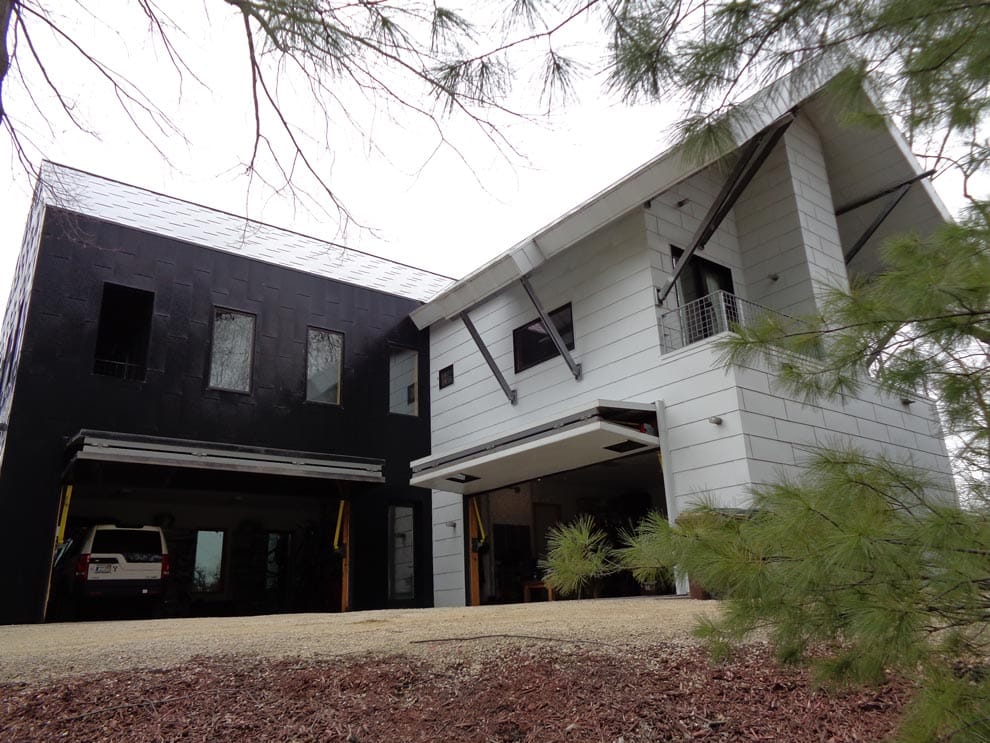 Two Schweiss garage doors open up to the Buehler home in Wayzata, Minn. Both doors are 18 ft. 1" wide by 9 ft. 10" tall. When Buehler purchased his home it had cable operated doors that he recently converted over to liftstrap doors.

Bob Buehler, a senior executive in the medical device industry, came to the realization that liftstraps on his bifold garage doors were an excellent solution for better, quieter, and faster-opening opening doors.

Two bifold doors were on his Wayzata, Minn. home when he and his wife, Nancy, purchased it from a previous owner several years ago. He referred to the doors as "a bonus and attractive feature" and believed the architect chose the bifold style of doors for aesthetic reasons.

Buehler went to the Schweiss Doors website where he first became familiar with the liftstrap doors.

“The liftstraps were a good option for us, It just a quieter operation and a better fit. You hear the drone of the motor, but there isn't the rattling that came with the cables. It's nice to have a free ceiling in the garage. We learned of Schweiss doors only after buying the house. We love the way they look on the house.”

The strong liftstraps, rated to lift 29,000 lbs. each, are great because they will open your door quicker; they are safer, longer lasting and quieter. The latter is what Buehler's first reaction was after the straps were installed and the door was again operational.

"The liftstraps were a good option for us, It just a quieter operation and a better fit. You hear the drone of the motor, but there isn't the rattling that came with the cables," said Buehler. "It's nice to have a free ceiling in the garage. We learned of Schweiss doors only after buying the house. We love the way they look on the house."

Both bifold doors are 18 ft. 1" wide by 9 ft. 10" tall. They are equipped with autolatches, remote openers, electric photo eye sensors and door base safety edges. One of the doors has three windows that allow natural daylight into the garage. Both doors have steel siding cladding on them.

Quartersawn Design Build of Edina, who built their home, was instrumental in ordering the Schweiss bifold doors for it. The bifold doors, and liftstrap conversions were installed by Schweiss Doors.

"We are happy we found the strap solution. Schweiss Doors, across the board, are a helpful bunch. When we call up, we get answers to our questions and when Dave and Gene were out (to do the liftstrap conversion) they were very helpful in explaining what they were doing," said Buehler. 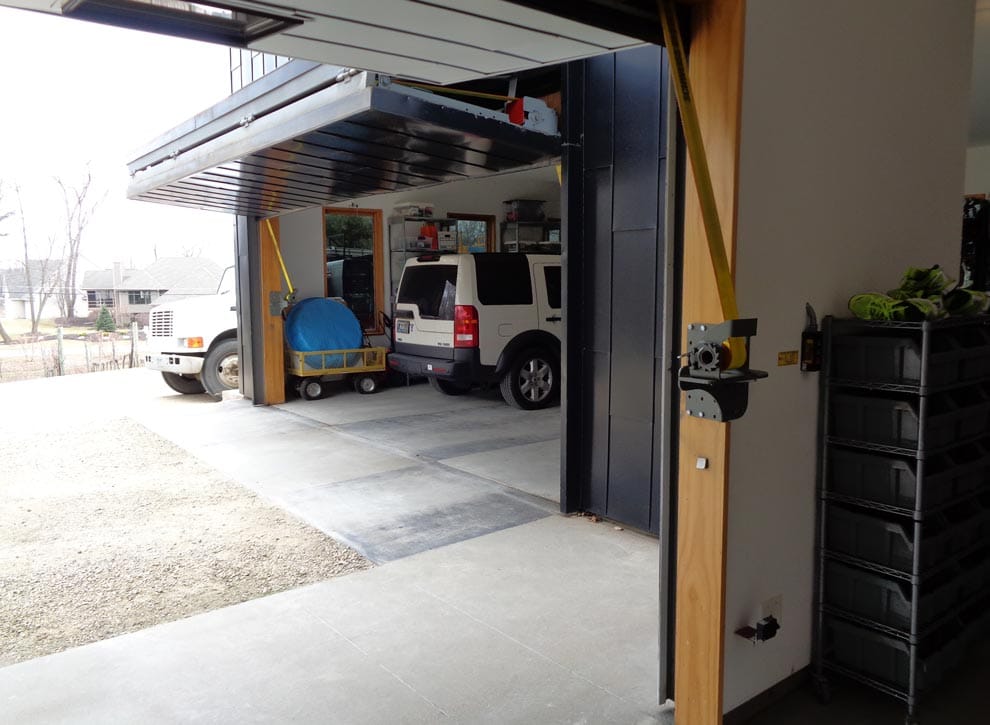 Since replacing the cables on his doors with liftstraps, Buehler has had no problems with cables breaking, overwrapping or fraying. His doors now also lift faster and are safer. 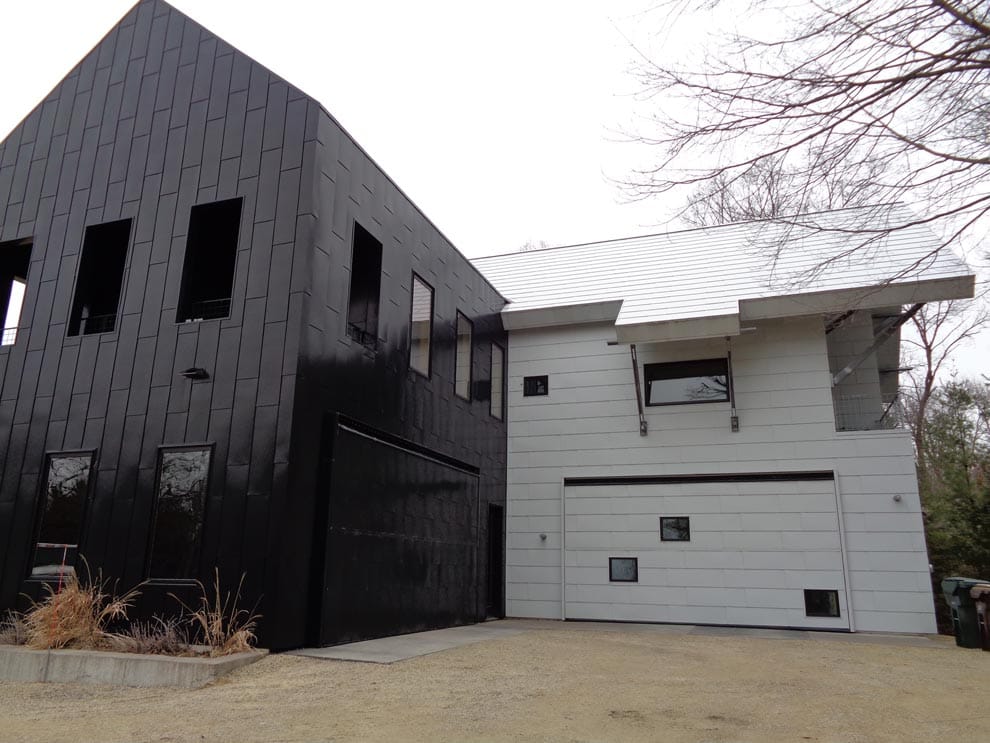 The windows on the white door have a unique design feature that allows light into the garage at different levels. The automatic latch feature closes Buehler's doors weathertight. 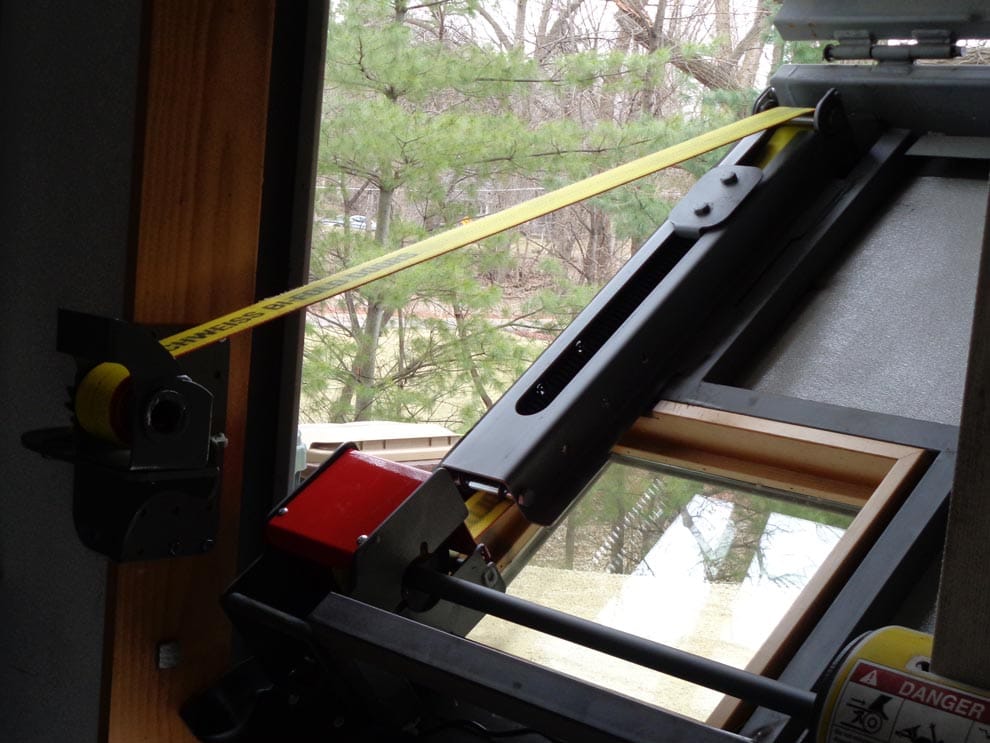 The newly patented Schweiss autolatch system is now an all-strap door with no more cables or pulleys to deal with. It also has a quieter and faster opening speed, and the straps do all the latching bringing the doors in tight to the building. 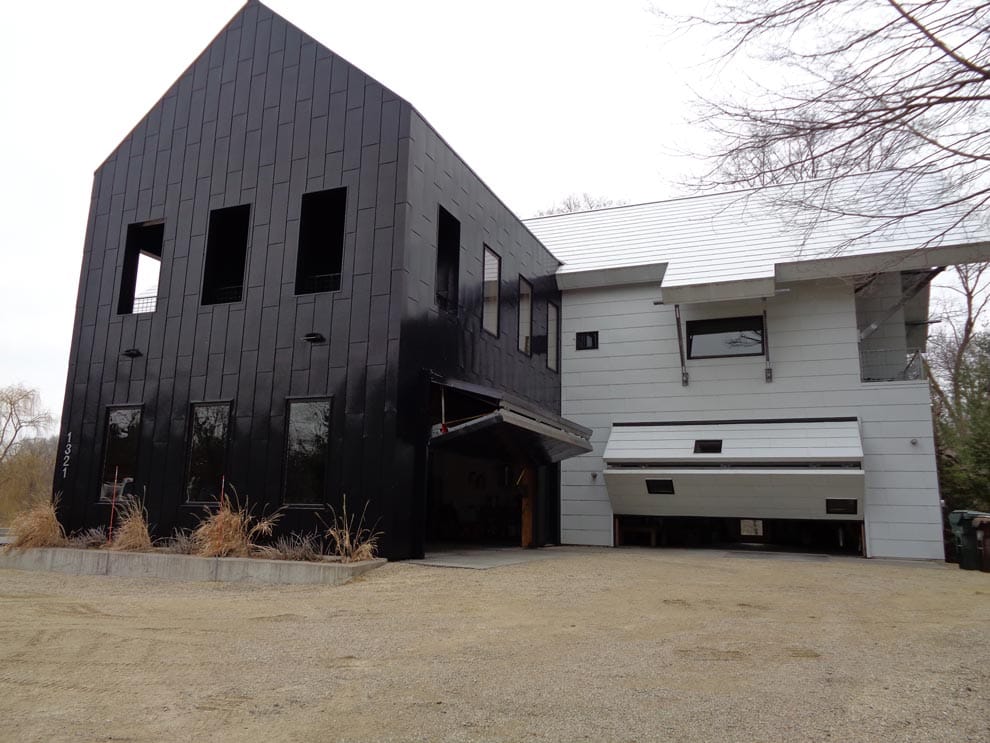 Schweiss bifold doors can be safely stopped at any opening height. Bifold doors are desired because you can park closer to them, they offer no loss of headroom and are ideal for heavy snow conditions because they lift straight up.

Carriage House helicopter hangar is very likely the most unique in America!

The Carriage House on the lakeshore property of Sid Morris, Cornelius, NC is very likely the most unique in America! It doesn't house horses and horse buggies. It doesn't house antique autos. Instead it houses his R44 helicopter. And that chopper gets to the Carriage House by first landing on a helio pad on the end of his 200' dock. A small electrically driven dolly then gently lifts the chopper with operator then guiding the chopper to its proper stall inside this remarkable 4-star carriage house.
Read More And See A Lot More

At 27 years of age, film maker/artist/author Travis Wood appears to be adding architectural design to his intriguing resume. Evidence of this new dimension is a most unique structure, a combination studio/guest house that he and his father are constructing on their vacation property on Martha's Vineyard, hugging the south shore of Massachusetts.
Read More And See A Lot More