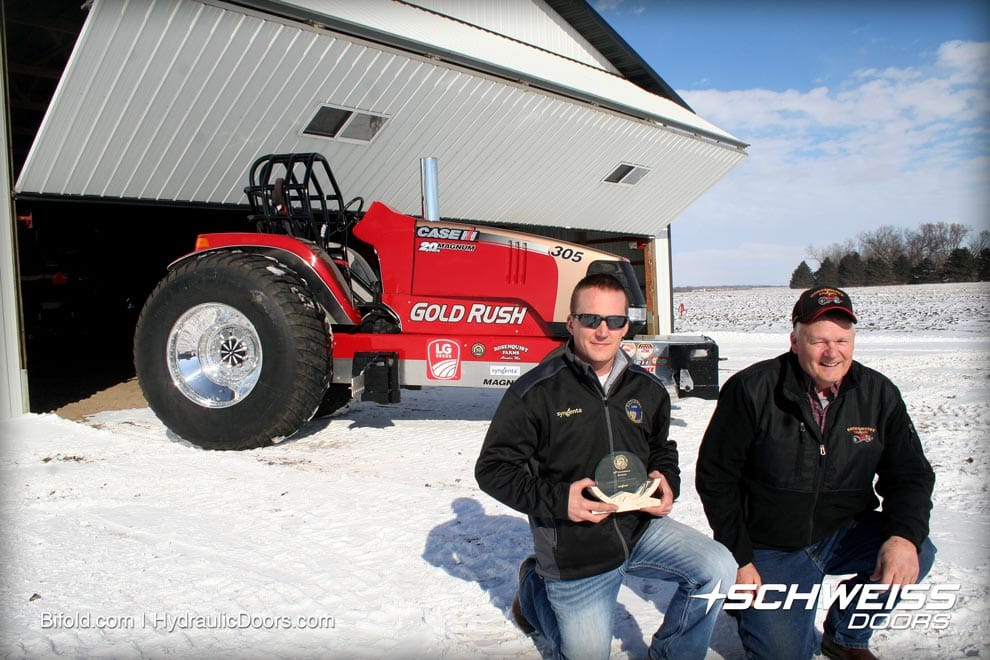 Jason Rosenquist holds the second place trophy he and his dad, Frans, earned at the 2018 National Farm Machinery Show Championship Tractor Pull held in Louisville, Kentucky. It was their first time earning a spot to compete at nationals; they missed capturing first place by just six inches.

While Winter Olympians were trying to make their mark on their specific sports in South Korea, Frans Rosenquist and his son, Jason, of Atwater, Minn., along with Pit Boss, Bill Daluge, of Buffalo, were in Louisville, Kentucky Feb. 13-16th competing for the first time against premier tractor pullers from around the world in the National Championship Tractor Pull.

"I like to call it the "Super Bowl" of tractor pulls, said Jason who was at the helm of their custom souped-up diesel pulling tractor called "Gold Rush." The Case IH 305 Magnum tractor with over 2,500 horsepower competed in the 9,500 lb. Limited Pro Stock class against 12 other pullers from across the United States. Gold Rush was the only Minnesota tractor in all of the competition this year.

In tractor pulling, like many other sports, victory is many times measured by a matter of inches. Many athletes can attest to that as can the Rosenquists who narrowly missed a national championship trophy run, coming in a very close six inches behind winner Brad Boldry of Rochester, Indiana to place second, and 12 inches ahead of third place winner, Justin Wagler, of Morgantown, Indiana. 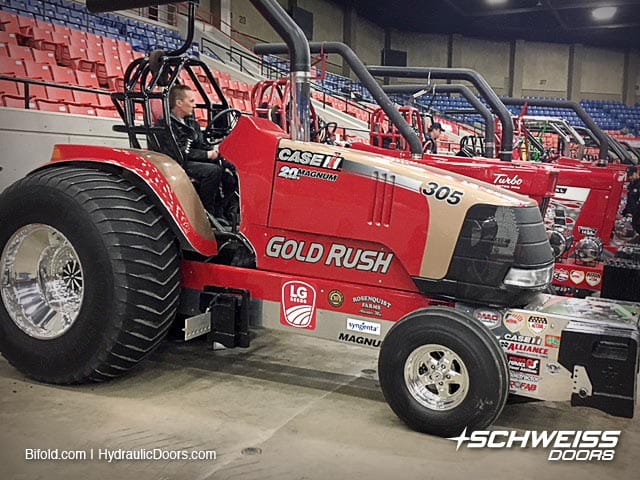 Jason waits patiently in line along with other pullers in his class for his turn to pull at the national championships. He was selected to pull 10th and held first place until the last tractor in his class edged him out by inches to win.

This years prize money purse of more than $250,000 will be divided amongst the top runners in close to 20 different divisions all capable of pulling a weighted sled.

I don't have a clue how much prize money we will get; they'll mail a check to us.," said Jason.

The sled they pull operates much like the sleds that kids use in the pedal pull competition, but on a much larger basis. The weight box starts out at 50,000 lbs. and as the tractor pulls it the weight box transfers forward putting more pressure on your hitch making it much heavier and harder to pull. The sled also has grousers, fin like apparatuses, which drop at some point and dig in under it. When a tractor spins out at the end of the run, the distance is computed down to micro-inches to determine the winner.

The numbers are not yet in for 2018, but in 2017, the event hosted 300,000 attendees from across the world while nearly 850 exhibitors filled all 1.2 million square feet of the Kentucky Exposition Center, making it the largest indoor farm show in the country. The always-popular National Championship Tractor Pull drew cheering crowds of more than 64,702 fans that year for the four-day event.

Prior to this competition the Rosenquist's competed in 18 pulls in Minnesota and Wisconsin. This national invitation-only high-octane event stars the nation's best drivers and their machines - Pro Stocks, Super Stocks, Modified, and Alcohol Tractors as well as two-wheel and four-wheel drive trucks.

Getting to the Nationals, even after placing there the previous year, doesn't guarantee you a spot for the following year. The event is by invitation only and much of the criteria to get on the list depends on a point system the drivers accumulate during the tractor pulling season. Jason said there were about 800 applicants this year in all classes to get into the nationals.

"You have to fill out a whole resume just to get there, but it helps when you win your state pull, region hooks and state championship. If you don't win anything at home, you won't get invited," said Jason who did win the 2017 United Pullers of Minnesota State Championship.

“I like to call it the "Superbowl" of tractor pulls. It can be an advantage to pull first, but sometimes the track gets better. We were the sixth tractor to pull in our class and led the field after our run until the 10th puller went 240 ft. beating us by a mere six inches. The guy that actually pulled 13th, placed third. I was in the lead for quite awhile; you might think you have it in the bag with just a few pullers left, but down there they all have top tractors; no slouches in the group.”

"We are continually trying to make modifications to our tractor to make it better. We also had someone use a hot-knife tire technique to sharpen the grooves for better traction," said Frans. "We try different turbos, it's constantly on the dyno, with new parts making more power, we ran about 4,600 rpms using one turbo. This was our first year in this class; we went up last year with a bigger motor," added Jason.

"The big class that runs on alcohol is really loud. Without plugging your ears you couldn't stand it - it would just blow your ears out. They have four big hemi-motors - they don't even look like a tractor, they look more like a dragster car. Our tractor runs on regular diesel fuel. They are pretty strict, you have to buy their fuel and water and they test it after you pull. There's no water in the motors, it's a regular tractor motor, ‘hot-block' they call it. A lot of the classes have tire size limits and the turbo and cubic inches can only be such and such a size. You have to go through tech before you pull. They want it fair for everybody," said Jason.

Watching the other drivers on tractors of every color before you run might help, but Jason said you know your tractor and don't know there's, you can get a little bit of a feel, but there are so many variables, they may have weights hid somewhere where you can't see them. There were about 10 women drivers this year, mostly in the truck classes.

Once you are there you only get one pull towards being named the best in the world in your division. The order of pull, determined by a random computer draw to see who will be first on the dirt, can and may not make a difference in the outcome. Drivers have the option to start anywhere within the 60 ft. wide track, whether it be at the center or off to the side where a previous pull took place.

"It can be an advantage to pull first, but sometimes the track gets better. We were the sixth tractor to pull in our class and led the field after our run until the 10th puller went 240 ft. beating us by a mere six inches. The guy that actually pulled 13th, placed third. I was in the lead for quite awhile; you might think you have it in the bag with just a few pullers left, but down there they all have top tractors; no slouches in the group," said Jason. 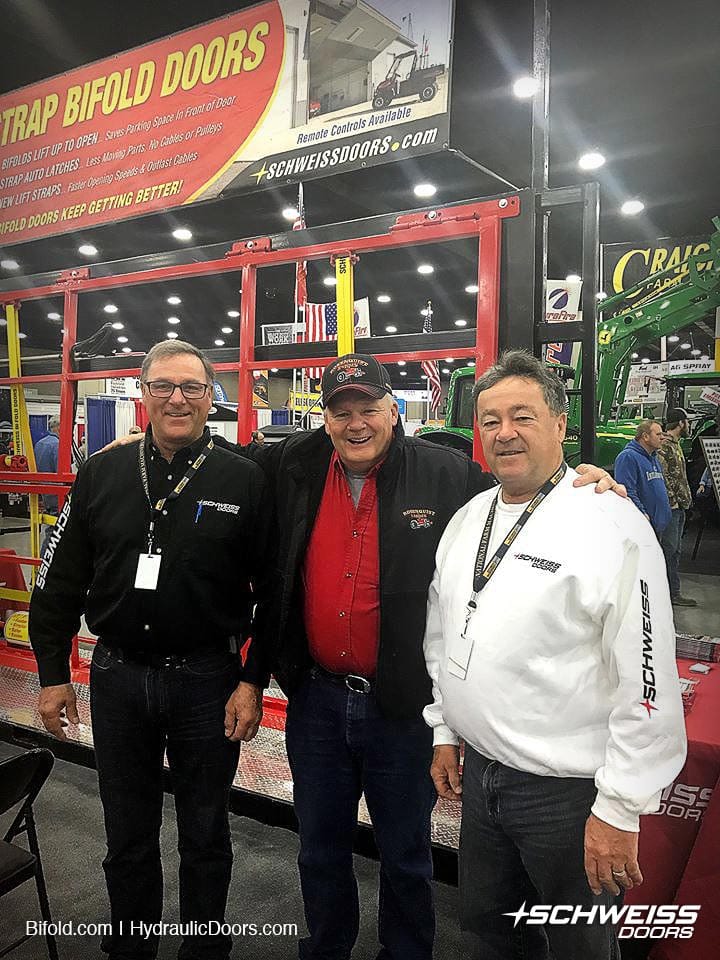 Frans Rosenquist stopped by the Schweiss Doors booth at the National Farm Machinery Show in Louisville. Rosenquist Farms in Atwater has purchased five Schweiss bifold doors that they have been using over the years. With Frans are Dave Schweiss, left, and company owner, Mike Schweiss.

Jason takes after dad, who was born competitive. Frans tried his hand at tractor pulling this past year where he tied for first in the state with his 1026 IH Demonstrator. Now, at age 63, he was also named 2017 Rookie Puller of the Year."

But Frans biggest claim to fame came about as a teenager as a professional snowmachine racer, traveling the world for 15 years and later being named to the National Snowmobile Hall of Fame in 2006. https://www.bifold.com/farm-photos-rosenquist.php His winnings over the years, amounting from $3,000 to $5,000 per weekend of racing on oval tracks enabled him to buy his first tractor, farming equipment, and rental on farmland that is now his. This year he and Jason were both signing autographs at the nationals.

Frans said they were selling tickets at the pull for up to $45. They also live-streamed the pulls on TV to about a dozen different countries, including for the troops serving in Iraq and Afghanistan.

"I guess my whole life I've been competitive," said Jason. "I was satisfied with my pull, I could have had a little more weight on the front to keep the nose down. Just being there was one thing, finishing second was icing on the cake," explained Jason.

This summer, between farmwork, Jason and Frans will be back on the circuit trying to earn another shot at nationals. If you mark down the August 7-9th date on your calendar which falls on Farmfest, you'll be able to see them compete at the Redwood Falls fairgrounds on both their tractors. 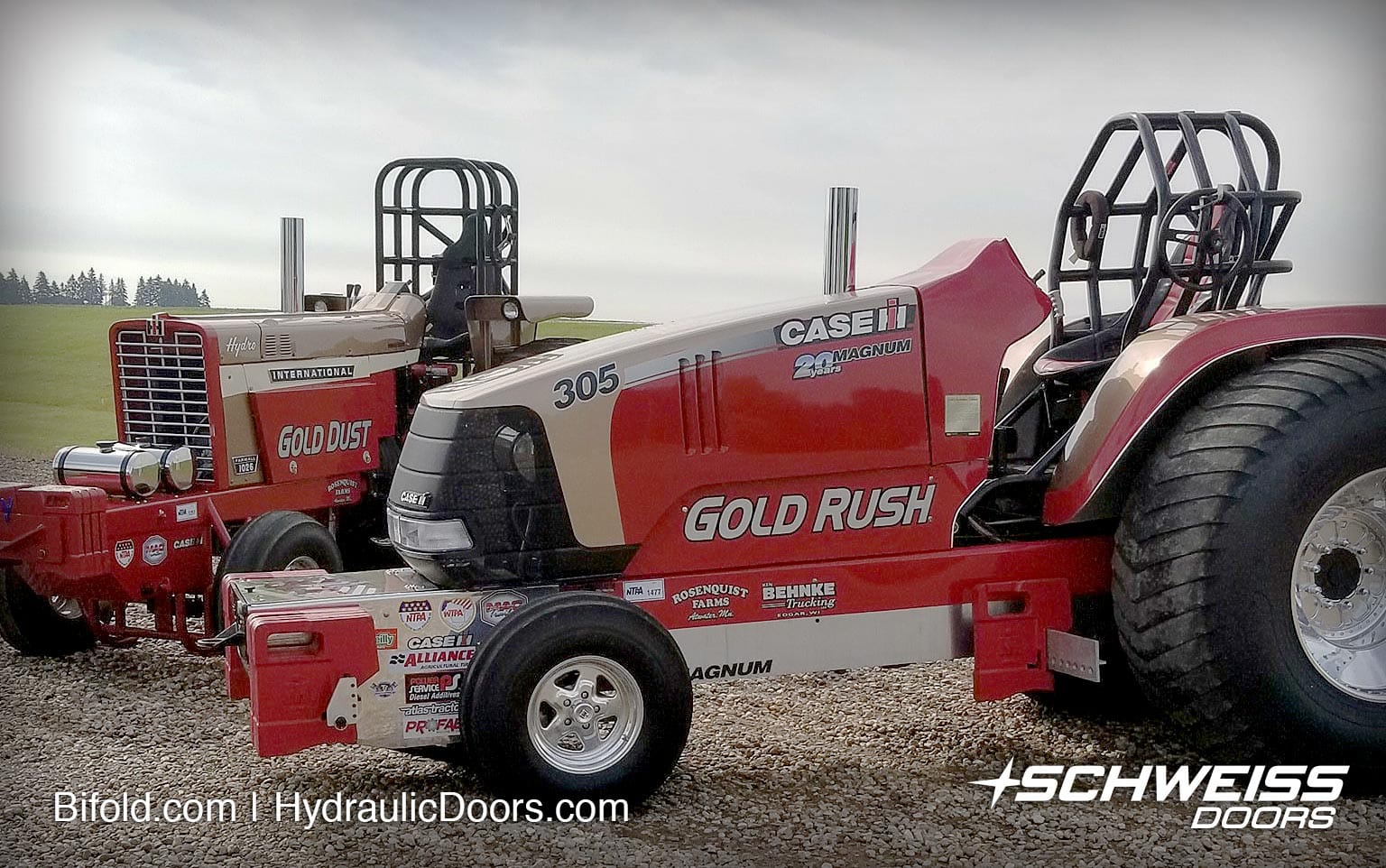 Rosenquists tractor, named "Gold Rush" is a 2,500 h.p. Case IH 305 Magnum that they ran in the 9,500 lb. Limited Pro Stock Class against drivers from throughout the United States. Frans tied for first in the Minnesota championships on his souped-up 1026 IH Demonstrator. He was named Rookie Puller of the Year in 2017. 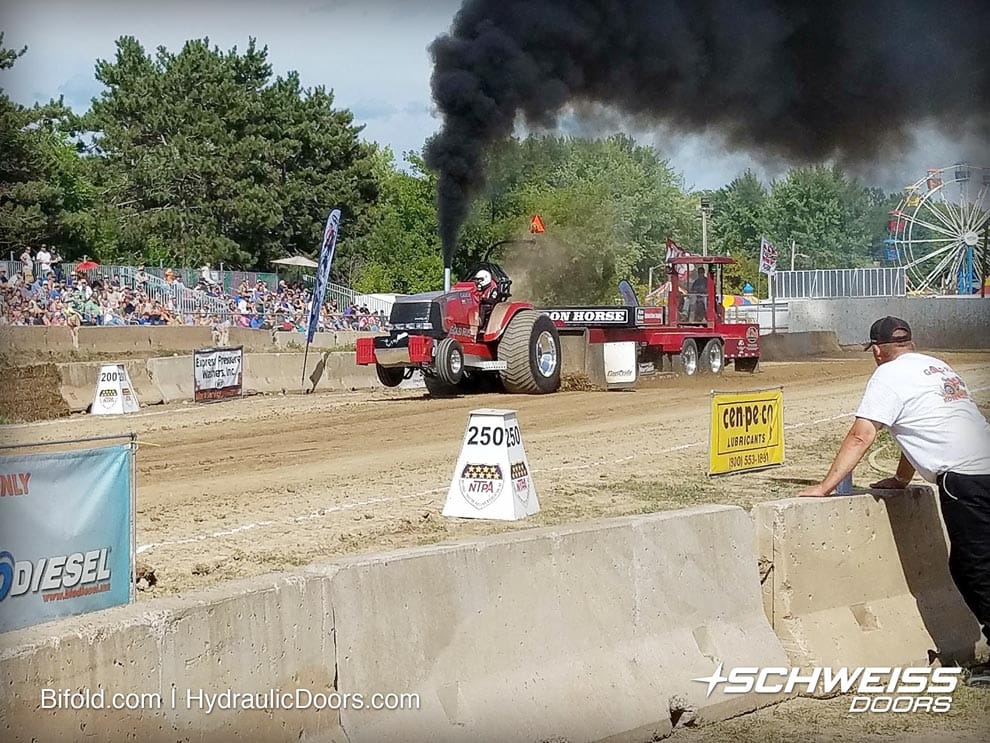 Black smoke pours out of the exhaust as Jason is shown here on his way to a first place finish at the United Pullers of Minnesota championships in Mora, Minn. For the indoor meet in Kentucky an extension is affixed to the exhaust to eliminate filling the auditorium with smoke. See video of him in action. 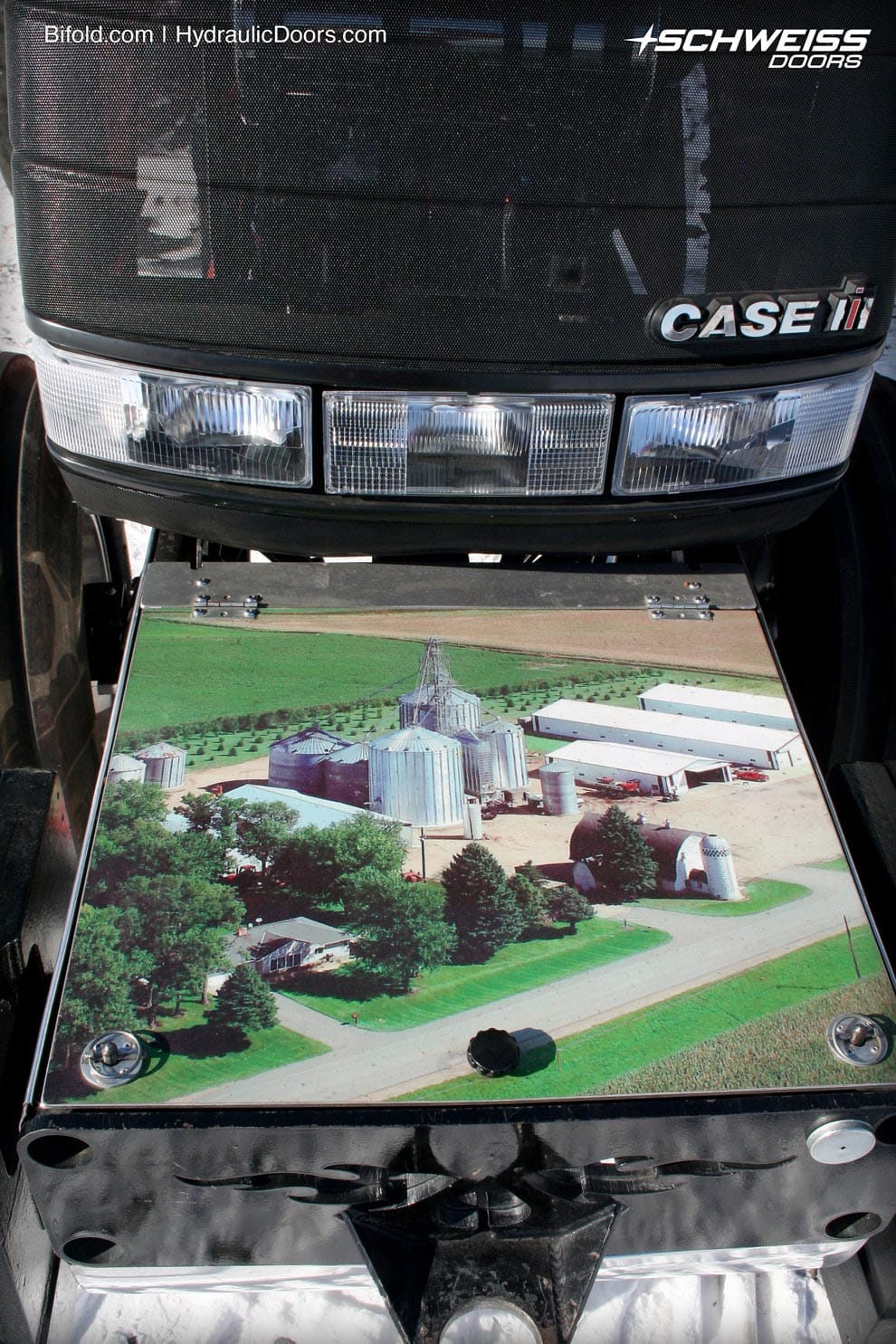 The Rosenquist's bring their Atwater farm to every tractor pull. On the front weight box is an aerial photo of all their buildings, five of which have Schweiss bifold doors.