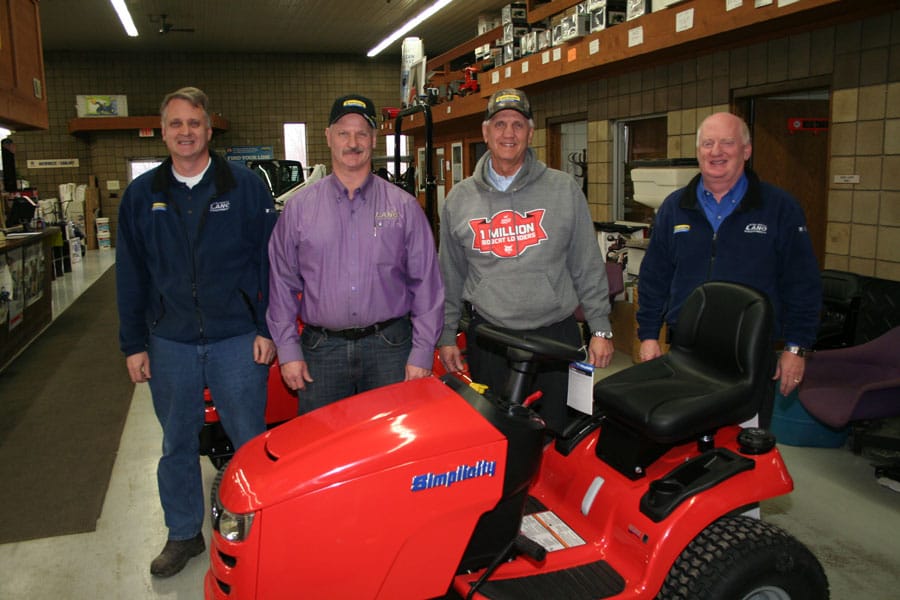 In 1989, following the retirement of Dick Lano, brothers Andy, Paul, Jack and Bob, took over the Norwood, MN business. Since that time Lano Equipment has expanded to add many new lines.

World War II had just ended and in March of 1946 a new business by the name of Lano's Body and Fender Works took roots in the small town of Chaska, MN. The original Lano brothers, Dick, Hauser and Clarence, returning from service in WWII, started that repair shop and expanded their business vision in 1948, when they took on the Allis Chalmers farm equipment line. When the company switched from the automotive business to farm equipment, brother Joe, also just out of the military, joined the corporation. The rest, as they say, is history.

Shortly after, in 1950, the New Holland hay and forage line was added. Then five years later, the Minneapolis Moline tractor was added to their farm equipment line. In 1958 the Melroe Bobcat skid steers were sold at Lano's. Because of their commitment to quality parts, service and sales, they are now one of the premier Bobcat and New Holland dealers in the state of Minnesota.

A year later the Lano brothers bought out the Allis Chalmers dealership in Norwood. Brother Dick Lano managed the Norwood store. In 1961 the Norwood store added the Oliver franchise to their line-up. Over the years the Oliver Company and Minneapolis Moline merged and formed the White Farm Equipment company. Through those same years, Allis Chalmers became the Deutz-Allis company and then later on became AGCO. AGCO then bought out White Farm Equipment.

In the mid 1980's the Ford Motor Company bought out the New Holland Company. Through this buy out it added the Ford tractor line to the Lano Equipment line of machinery. The Ford New Holland name later became just New Holland.

In 1989, it was time for the present generation of Lano's to take over. Dick Lano retired and now Lano Equipment of Norwood is owned and run by brothers Jack, Paul, Bob, and Andy Lano. Bob is the office manager; Andy is parts manager; and Paul and Jack head up the sales department.

Lano Equipment in Norwood is located adjacent to Highway 212 just a short distance from the city of Norwood. They put up a new building here in 2013 with a Schweiss 49' x 19'5" bifold liftstrap door.

As the emphasis on farmers needs for larger equipment to run their larger acreage farms came about, so was a need at the Lano dealership for a new 80' x 100' building and for a large door on it to give access to that equipment for servicing and sales. It was just what they needed, especially since a fire in 1987 destroyed all but the back portion of the 1964 building which had been added onto a couple of times. In the summer of 2013 the surviving addition was torn off and they built new.

"It's been a very good door, we've had no issues with it, there's less maintenance and it seals nice. Overhead doors do not seal like this one in the winter. It's big enough for our 36 ft. wide cultivators to be brought in on a forklift without having to be torn down and set up. It saves a lot of time. In the wintertime it gets used whenever a cultivator is brought in and out. In the summertime it gets used a lot. Prior to the door and our shop, they had to be set up outside. It's tall enough to bring our big combines in and in the summer we leave it open a lot for nice ventilation."

The Lano brothers decided on a Schweiss 49' x 19'5" Schweiss bifold liftstrap door. The door is equipped with autolatches and remote openers and gets a lot of use, especially during the growing season. What they like most about the door is its size.

"It's been a very good door, we've had no issues with it, there's less maintenance and it seals nice. Overhead doors do not seal like this one in the winter. It's big enough for our 36 ft. wide cultivators to be brought in on a forklift without having to be torn down and set up. It saves a lot of time," said Jack. "In the wintertime it gets used whenever a cultivator is brought in and out. In the summertime it gets used a lot. Prior to the door and our shop, they had to be set up outside. It's tall enough to bring our big combines in and in the summer we leave it open a lot for nice ventilation."

The liftstraps and autolatches are other features high on the appreciation end.

"It's a one person operation to open the door. You don't have to run across the room to open and close it. On the other shed we have a competitors bifold door, it was put on before we knew of Schweiss Doors. It's a 1991-92 cable lift; we've broken cables, had a gearbox go out, we've had issues with the latches. The next time it goes to heck we'll probably have to go to a strap and autolatch conversion,"
said Jack.

Jack said he talked to Mike Schweiss about a hydraulic door but decided on a bifold door because you can park closer to it without the worry of bumping into something parked outside it. He first met Mike Schweiss when he stopped at the Norwood dealership inquiring about trading in some used skid steers on a new and larger one.

"When it came time to install the door Schweiss was here, there was no waiting. Schweiss has been good to work with. When the door needed some adjustment, they were here within a couple of hours, and they showed us how to adjust it after that," commented Jack.

What started out with a few hardworking fellas back in 1946 has now grown into a successful dealership that employs 24 people. If you're going to be a successful implement dealership you also have to have a top-notch service department. Lano's can fix and repair everything they sell from small riding lawn mowers to massive 600 horsepower articulated 4-wheel drive tractors, 500 horsepower combines and 36-row planters. This includes retrofitting of older equipment so it can be GPS driven and bringing in used equipment and construction equipment ready for the next buyer.

"We have a Trimble GPS system; we put a lot of these on competitors tractors and trade-ins. There have been big changes in technology for the past 10 years. Right now when a mechanic goes on a service call a lap top computer is his number one service tool — you need that computer before you need wrenches," explained Jack. "We all sell it, but Dave Latzke and Lucas Schrope are our GPS specialists."

"It's a one person operation to open the door. You don't have to run across the room to open and close it. On the other shed we have a competitors bifold door, it was put on before we knew of Schweiss Doors. It's a 1991-92 cable lift; we've broken cables, had a gearbox go out, we've had issues with the latches. The next time it goes to heck we'll probably have to go to a strap and autolatch conversion."

Their sales department is comprised of four seasoned salesmen with more than 25 years experience. GPS technology is everywhere in the farm equipment business these days and it is imperative that Lano specialists are up on all the latest technology. Every tractor and combine, even crop sprayers are factory wired providing the capabilities to be GPS driven.

For many businesses diversification has been the key to growth and being able to stay in business. In the 1980s when farm income plummeted, interest rates soared into the 20 percent range, and many of farmers were closed out by their local bankers, Lano Equipment did what they had to, to survive those lean years and other years as well. Just selling tractors would not keep the wolf from the door.

Today Lano Equipment is the one-stop implement dealership for customers all over the state and especially within the prime agricultural land of central and southcentral Minnesota.

"With the Internet, we go everywhere, but generally speaking most of our sales are within a 50 mile radius," said Jack. We also offer onsite in-the-field service and repair.

"Farming has its ups and downs; we are going to be in lean times now with the low prices, but it's bound to turn around. The good used stuff and smaller stuff is selling well now. And that's what saved us during the 80s too." commented Jack. 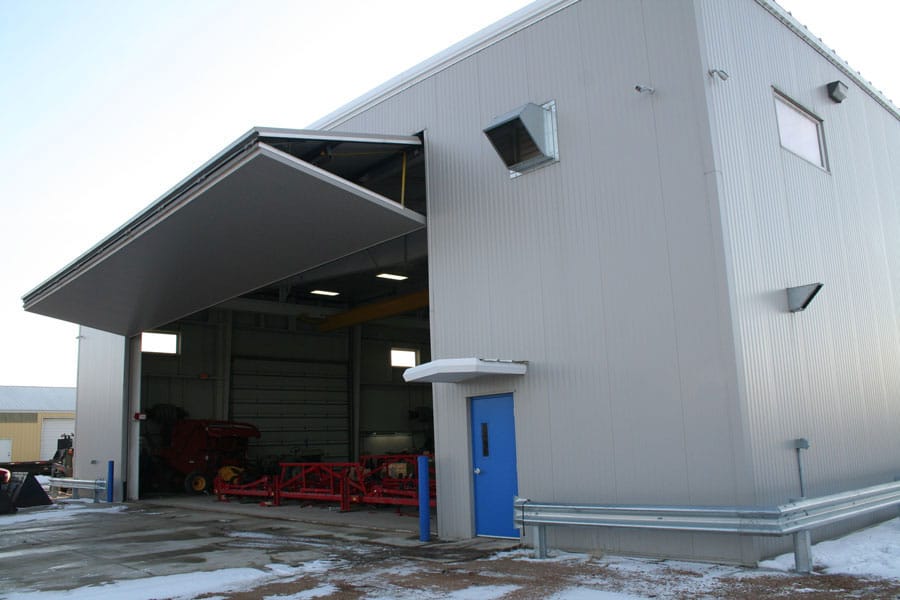 He said that with all their lines of skid steer loaders they also remained strong in the construction business when farming was bad. For the future he sees implement dealerships being fewer and farther between. He mentioned that Lano is one of the few dealers that aren't tied together with mega dealerships comprised of five or six dealerships.

In addition to the long line of farm related equipment sales, Lano also has a rental business. With their location fairly close to the Twin Cities business has been good for compact tractors, skid steers and lawn and garden equipment. Lano Equipment offers a huge inventory of new and used skid steer loaders, mini-excavators, tractors, farm equipment, trailers, utility vehicles, attachments and much more.

If a farmer was starting out from scratch without any equipment, they could get all they need from Lano Equipment. And if they don't have it on hand, it can usually be acquired quickly through other New Holland dealerships.

"New Holland is a full line company, specializing in tractors with four wheel drive all the way to compacts, combines, skid steers, plus hay and forage equipment. Hay and forage is what made New Holland. We can cover everything," noted Jack.

The 49' wide door has been a real time saver at Lano Equipment. This cultivator at the entrance was brought in by a forktruck in one piece eliminating the need to break it down. The 19'5" height is tall enough for even the largest combines to enter. 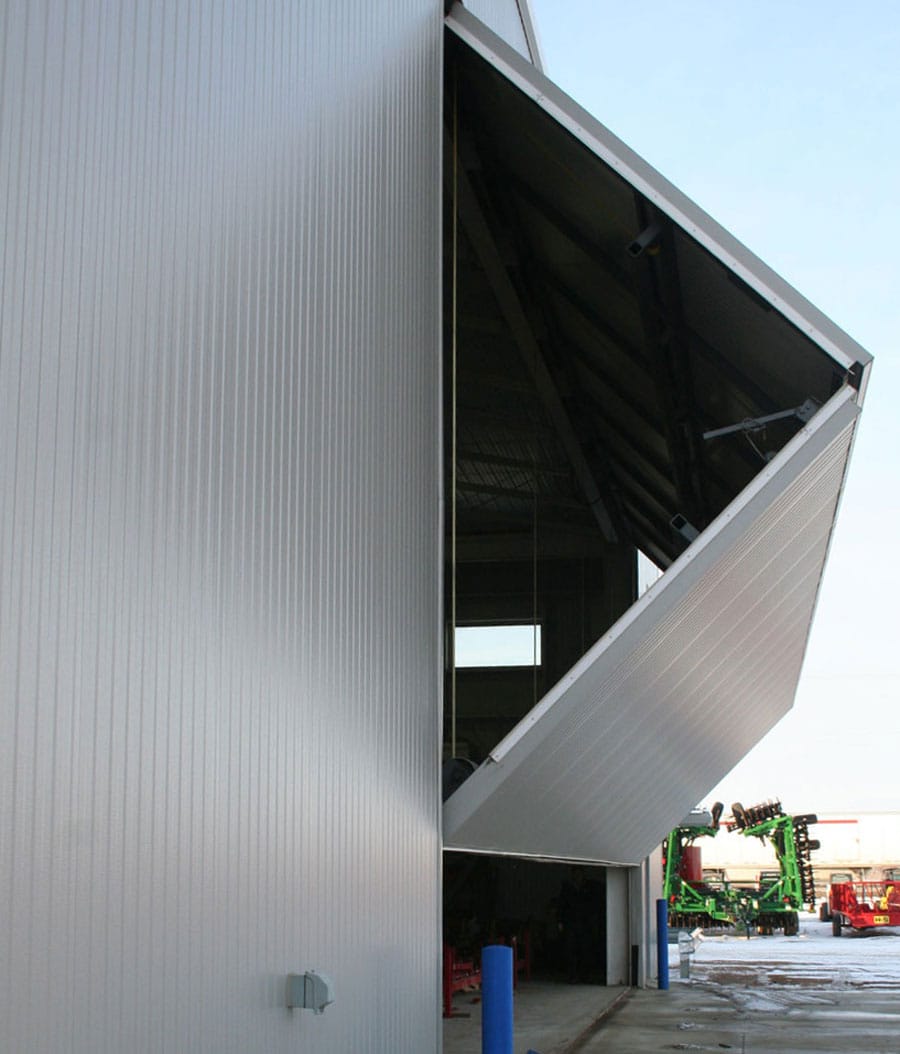 Jack Lano said the Schweiss bifold door is very low maintenance. They chose the bifold door over a hydraulic door because they could park closer to the building. It gets used a lot year round. 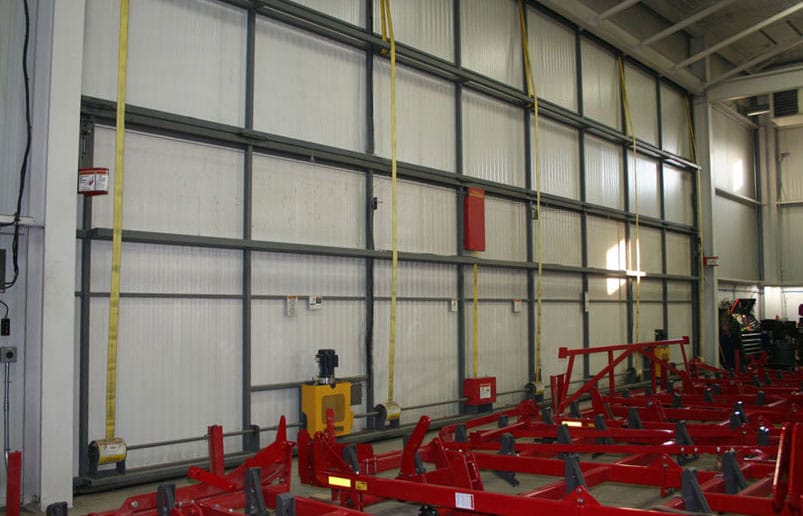 Having had experience with a cable lift door, Lano really likes the fast opening and quiet liftstraps on their new door. They also like the autolatch feature which allows one person to open the door quickly. 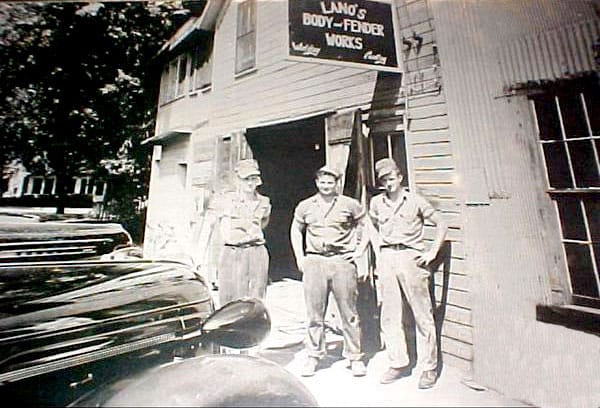 Lano's Body-Fender Works originated out of Chaska, MN shortly after WWII by the Lano brothers, Dick, Hauser and Clarence. Just two years later they took on the Allis-Chalmers farm equipment line that has now expanded into New Holland and other lines. 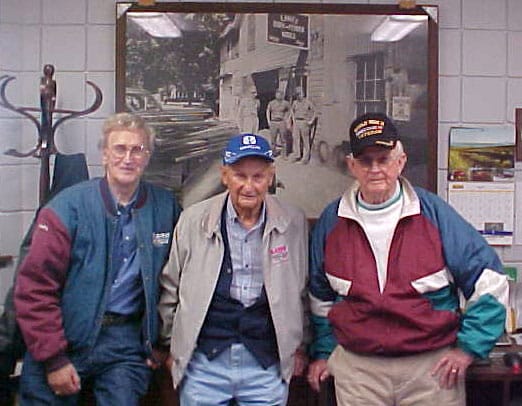 In 2008, the three individuals who started up Lano's Body-Fender Works gathered for a photo in front of their original 1946 business photo. They are from left, Hauser, Dick and Clarence. 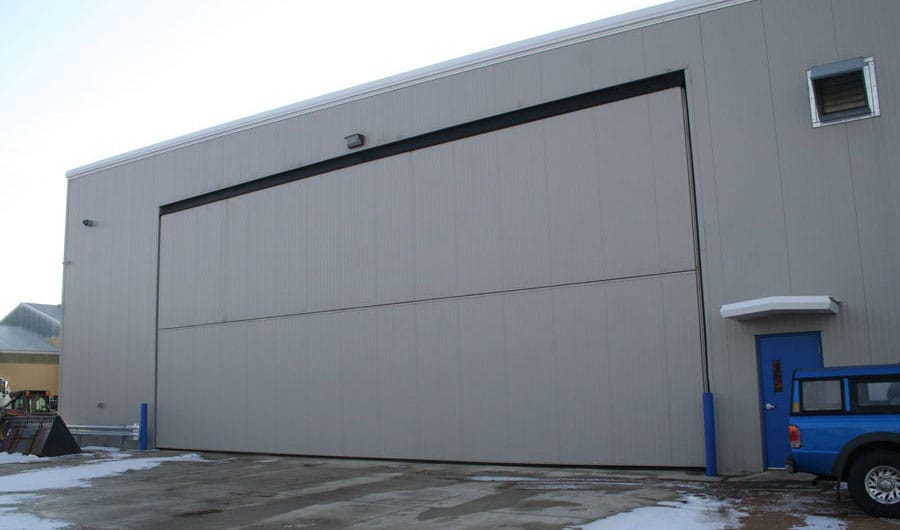 This big Schweiss 49' x 19'5" bifold liftstrap door opens up most of the east end of the Lano Equipment dealership building. The door was built large for time saving and easy access to today's large equipment. 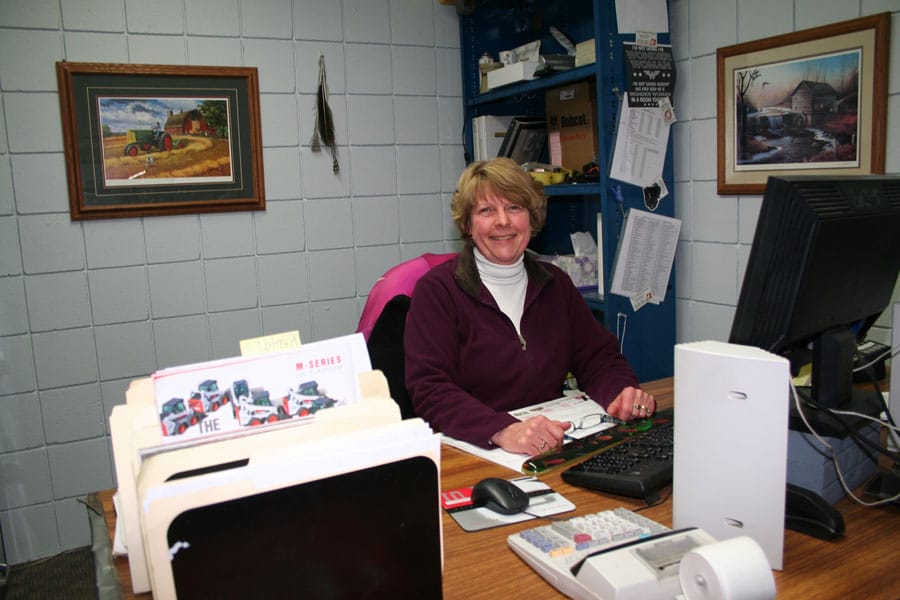 Julie Hanson handles all the rental and warranty division duties. 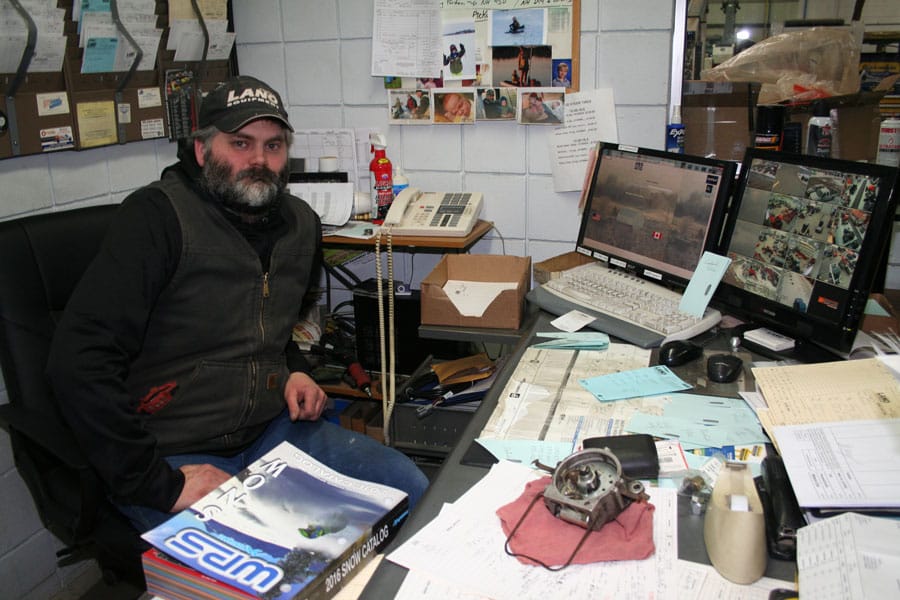 Nathan Heldt is the service manager at Lano Equipment. 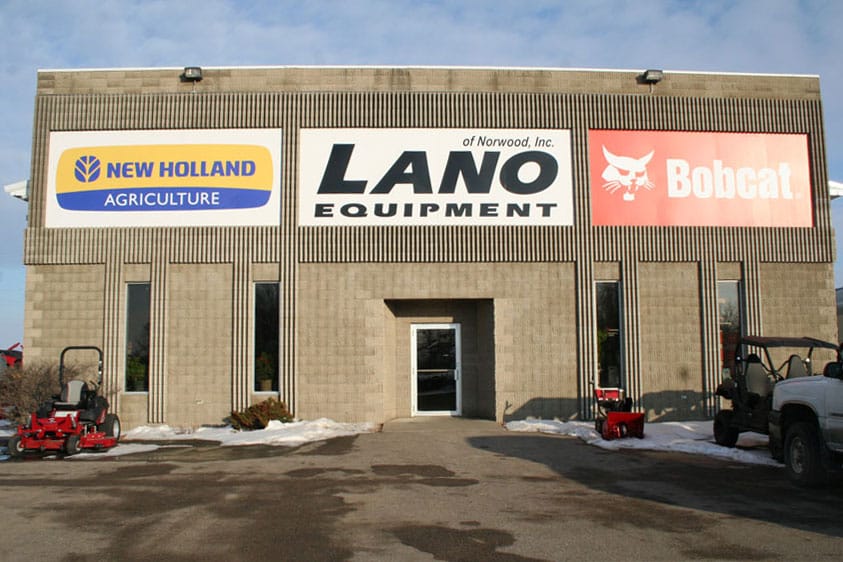 Lano Equipment draws customers from a 50 mile radius and through the Internet even farther away. They can provide any farmer all the equipment he might need.