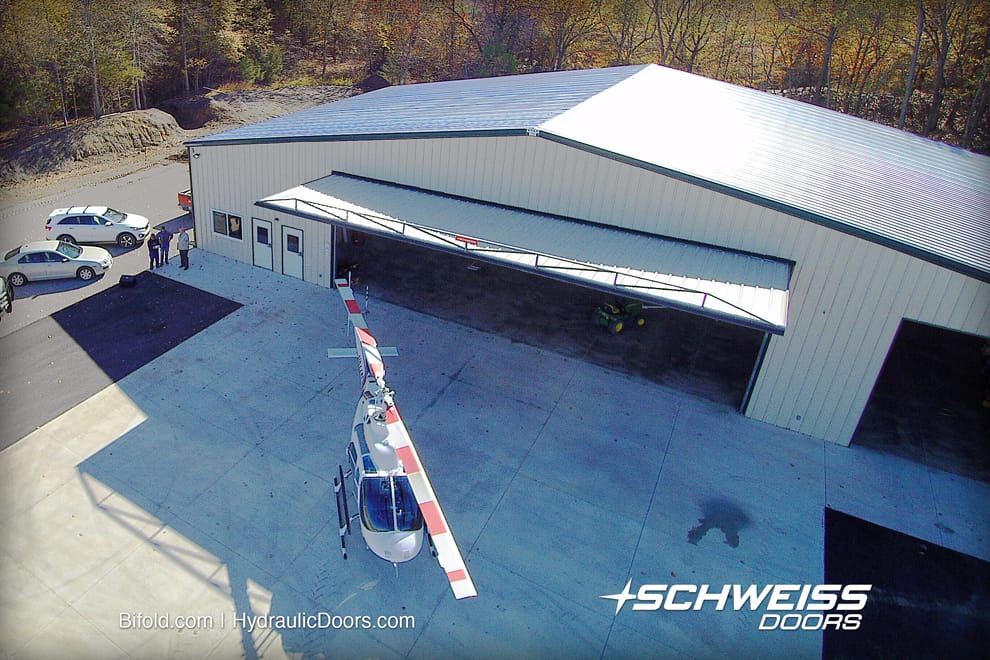 This 98' x 70' hangar owned by Ely Helicopter Services of Sallisaw has a Schweiss 46' x 15' hydraulic door with a remote opening system. The door is positioned in the middle of the steel building endwall.

Receiving an award for a job well done is always 'frosting on the cake,' however, pleasing a customer is more of a top priority among craftsmen in any field.

Jason "Hoot" Ely, of Ely Helicopter Services was added to the satisfied customer list after having a new 98' x 70' hangar built for his thriving Sallisaw, Oklahoma crop spraying business that also provides anything from aerial sightseeing and much more.

I looked at the way your bifold doors come together and the thickness of the backing where the hydraulic door pushes out on the hydraulic cylinder. I could just see more quality in it and they were very competitive in price. When I put up your Schweiss doors I know what I'm going to get and what I expect. When we look at aircraft hangar doors, it's going to be Schweiss.

Bill Buckner of B&B Welding in Sallisaw, Oklahoma was the Ely Helicopter Service building contractor. He specializes in Star Building Systems and has installed several Schweiss hydraulic and bifold doors over the years and he stands by them above all others on the market. The steel hangar was entered into the Star Master Builder Contest and won first place in the Best of Hangar category

Ely has a 46' x 15' Schweiss hydraulic door on his hangar with two remote openers that can be used in his truck, planes or helicopters.

"I really like the one-piece door. It also gives you more shade and keeps the hangar cooler," said Ely. "I've seen Schweiss doors before on other hangars, I'm totally pleased with the construction of the door."

He learned the flying business from his dad, John, at the early age of 17. Jason now spends most of his time working as Operations Manager. They have two other helicopter pilots on board.

"We go anywhere between oceans if there is enough work to do. We're getting ready to head toward Iowa and will finish the fungicide season up in Minnesota. We had been renting three hangars at the city airport for awhile, we have our own grass runway at our home place five miles from Sallisaw and this puts everything in one location," said Ely. "I got my start in flying from my dad. We actually started in the spray business in 1975 with one airplane.

"I like the hydraulic doors for the full canopy they provide with no loss of headroom. For that reason and also it keeps our sidewalls down low, the higher we have to go with a building; the more cost," said Buckner. "The Ely hangar has three offices, it's air-conditioned and really nice, but you know, airplane hangars are all about the doors and the floors."

It was Buckner who recommended a Schweiss door for Jason.

"Jason was looking at a bifold door out of Tulsa, Oklahoma. I don't know the company he was with, but I talked him into a Schweiss hydraulic door. When I put up your Schweiss doors I know what I'm going to get and what I expect. Being I was putting the door in I really wanted to go with Schweiss," said Buckner. a

"Installation is not hard at all; in one day we had the door hung and on the next day we had all the hydraulic lines ran and got the door working. Every time I've called, as far as customer service, Schweiss always answered my questions or got right back to me. I've never had a problem with one of your doors, but I would think if I ever did I think I could call you and it would get fixed, " added Buckner.

Buckner said he first heard of Schweiss doors while looking at a few hangars at the Bentonville Airport that had Schweiss bifold and hydraulic doors on them and others that didn't.

"I looked at the way your bifold doors come together and the thickness of the backing where the hydraulic door pushes out on the hydraulic cylinder. I could just see more quality in it and they were very competitive in price."

"B&B Welding only sells and erects Star Buildings and we know them like the back of our hand. We built about 150 Star buildings, anywhere from a 30'x 50' to a 250' to 250' in 15 years. If someone calls and they have a different building on the ground I won't take on the job. And when we look at aircraft hangar doors, it's going to be Schweiss," expressed Buckner

The steel hangar, built by B&B Welding was entered into Star's Master Builder Contest and won first place in the Best of Hangar category. Inside the hangar are three air-conditioned offices.

Ely Helicopter Services is a family owned business. John “Hoot” Ely, pilot and owner, brings 44 years of flying experience to the business. Theirr family has enjoyed many years of flying and they want to provide that same exciting opportunity to you!

The Ely family offers helicopter services designed to entertain you or assist in the operation of your business. Pilots: Jimmy Westcott is a pilot for Ely Helicopters. He has a Commercial, Instrument and is a Certified Flight Instructor. Their pilots bring years of experience, the highest quality control standards and the goal of customer satisfaction to each of our take off and landing.

In 1992, Bill & Jessica Buckner entered the world of metal buildings under the name of B&B Welding Inc. Their goal was to build quality metal structures at a price that would be affordable. Twenty plus years later and over 100 engineered buildings built, they grew into a family-owned business.

B&B Welding, Inc continues to realize their goals. Unlike others, they stay with you until the job is done. This has been a benefit to their customers, and saves them much in the way of dollars and patience. Whether you need an airplane hangar, warehouse, indoor riding arena, shop, church, mini-storage, farm equipment building, or a commercial building, B&B Welding, Inc. guarantees you quality service.

Ely Helicopter Services went with a one-piece hydraulic door in order to get the optimum clear opening height on the sidewall of their new building.

The Ely hangar is air-conditioned and the door is insulated to retain heat in the cold months and keep the hangar cool during hot Oklahoma summers. The large canopy that the door provides when open also helps shade the interior of the hangar.

Bill Buckner of B&B Welding said he likes the Schweiss hydraulic doors for the full canopy they provide with no loss of headroom and ease of installation. He stands by them above all others on the market. 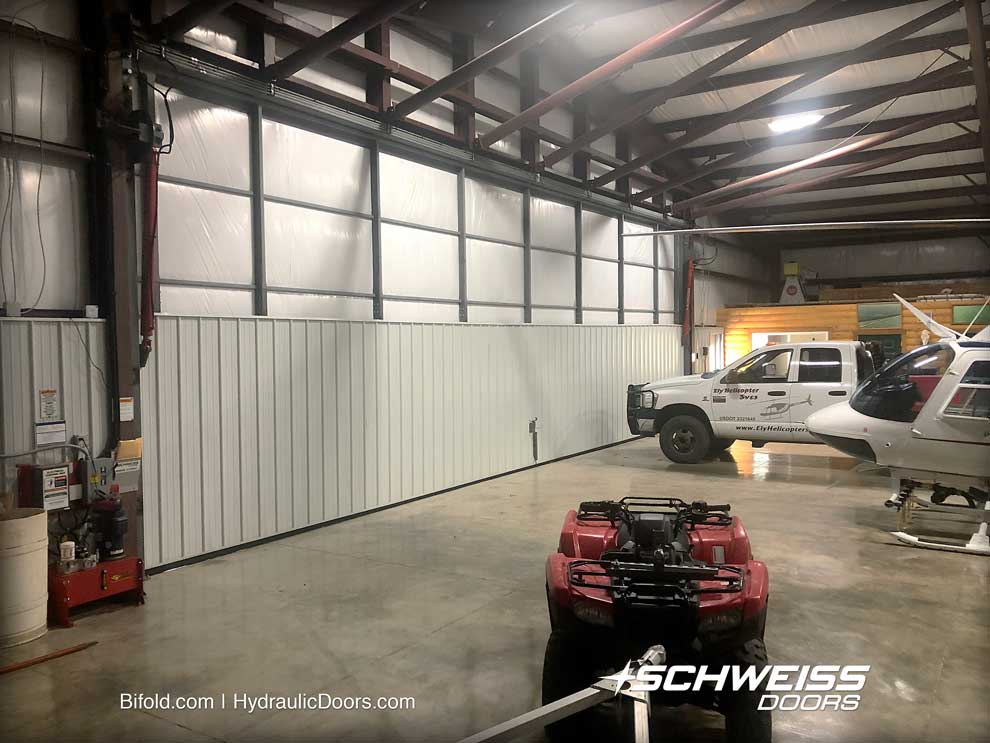 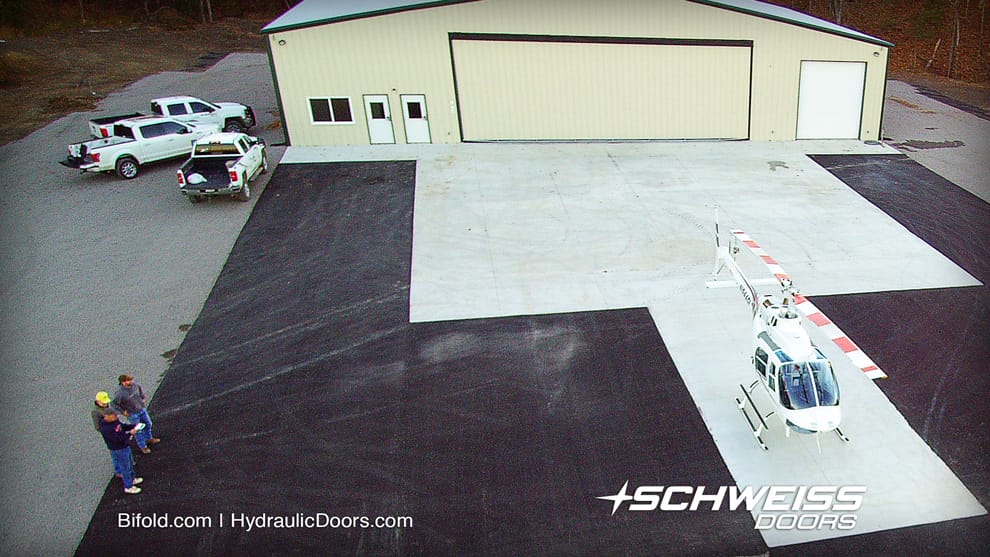 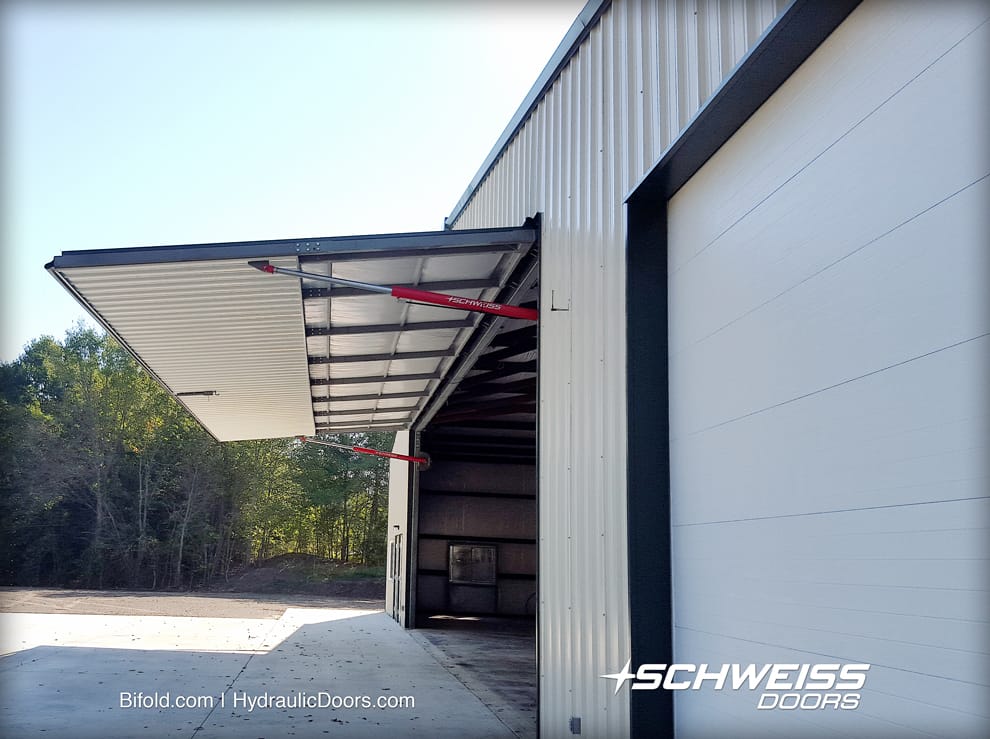