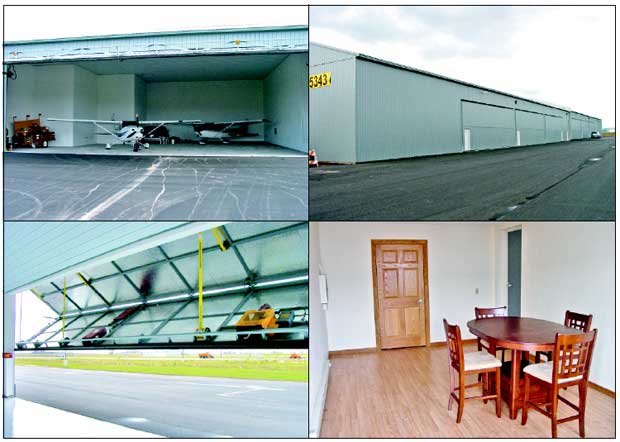 Aircraft Storage Solutions, LLC offers condominium hangars with many of the comforts of home or office. Each condo is equipped with a Schweiss bifold door.


How many bedrooms? That was the most frequently asked question from almost everyone who heard of the condominium hangars being constructed at Outagamie County Regional Airport (ATW) in Appleton, Wis. It took a little explaining that the "condos" were condominiums for airplanes.

The development is spearheaded by Jim Uher, a retired Air Wisconsin captain. Uher had long thought that there was a need for hangar space at ATW which provided amenities not available in a municipal hangar, such as heat, water and bathroom facilities. In the spring of 2005 he organized a group of four like-minded pilots including himself. Besides Uher, the group consists of Patrick Spillane, a retired technical college teacher, Wayne Schmidt, a builder, and Thomas Janssen, an attorney. The group formed Aircraft Storage Solutions, LLC to be the developer and commenced negotiations with Outagamie County.

The concept of condominium hangars at a public-use airport was novel for both the development group and ATW's administrator, Donald Hoeft. After several months of discussion and negotiation, an agreement for the project was reached. A simplified explanation of the arrangement between the developer and ATW is:
1. ATW and the developer entered into a 30-year lease with two-five year options of a large parcel dedicated to the development of a building with 14 condominium T-hangars;
2. The leased parcel is subject to a Condominium Declaration for the erection of 14 nested T-hangars; and,
3. When a total of 10 of the T-hangars are sold, the condominium building will be managed by the Condominium Association.

There are eight similar sized hangars of 1,363 sq. ft. The firewall through the center of the building breaks up the continuity of "nesting" of the T-hangars and as a result, the four hangars near the center of the building are larger in size ranging from 1,472 ft. to 1,600 ft. The eight similar sized hangars and the four larger hangars near the center of the building all have 44' Schweiss Bifold Doors. On each end are two large hangars, with 58-foot doors built to accommodate large twins and small corporate jets. Each of these hangars is 3,120 sq. ft. and is configured for an office and a bathroom. Prices for the condos range from $46,900.00 for the smallest to $106,900.00 for the largest.

Estimated total cost of operating the building is $3,000.00 annually. The largest single element of cost is building insurance. Units will be assessed a condominium fee which will be based on each units proportionate floor space compared to the floor space of the entire building. For the small units, this amounts to about 6-7% of the total operating costs. The developers are anxious to repeat their success at other airports. For additional information contact Jim Uher at (920) 277-5343.